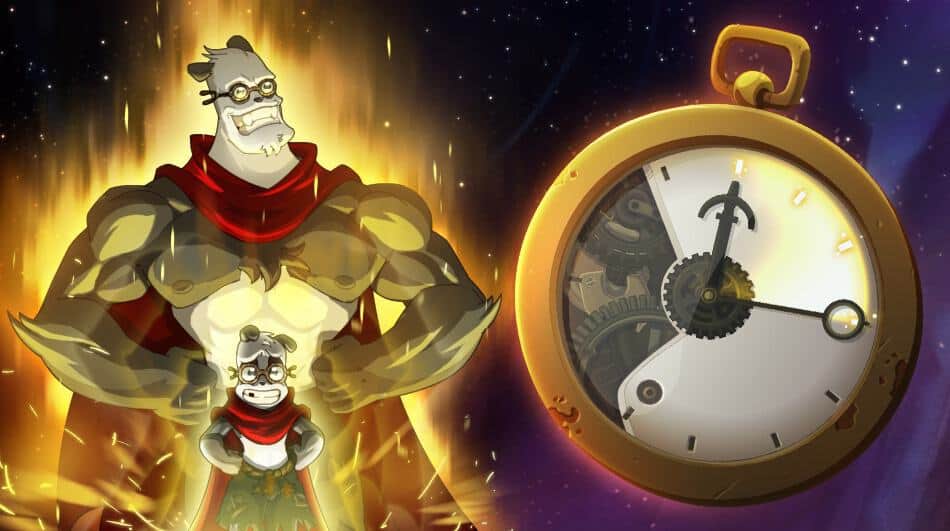 Dofus is centered around getting your character the highest level possible to unlock new content, spells and items. This leveling guide will focus on providing you with the best methods to quickly acquire experience so you can maximize your leveling efficiency in both the Dofus Touch (mobile) and Dofus (PC) games.
In case you're a new player discovering all the content, doing quests and achievements will net you a decent amount of experience but it is by far the slowest way to level up.

This method will work fine for Temporis 2 Event, the only difference is that this time the kolossium is disabled.

Note that this works for both Solo and Group play, but grouping up will always get you a lot more experience than going Solo, unless your gear is really good and you can find 1 monster groups really fast.
After playing Dofus for a long time, I've acquired quite a few strategies on how to maximize my playtime to get the most out of it without grinding the same things too much. Cra is at the moment the most powerful class in the game in terms of leveling up quickly, therefore I made a Cra. Cras are excellent for leveling due to the fact you can kill some level 200 monsters when you reach the highest level of Retreat Arrow (around 60). Retreat Arrow paired with Burning Arrow costs only 7 AP per turn and this combo can push the monster far enough that it is forced into an endless loop where it cannot touch you if you plan it right. Leveling my Cra to 60 was rather quick, kill a few monsters in Incarnam to reach level 5 and head down to Astrub and murder some solo Piwis (fighting more monsters if you're higher leveled does not give you more experience if you're solo). Experience is calculated based on your and monster's group level, meaning if you're a level 30 Cra fighting a solo Piwi level 15 you will get less experience than fighting two Piwis, which should be around your level. After killing some Piwis and acquiring a Piwi Set, head over to Tainela or Gobball Corner and kill Gobballs until you've got a full Gobbal Set, or at least the majority of it. Head over to Incarnam and complete the dungeon achievements, come back to Astrub and do the same for the low level dungeons. This should give you enough Kamas to mage your Gobball Set, head over to Bonta or Brakmar and get your set pieces Vitality overmaged/exo maged with Pa Vit runes (+15) they're quite cheap and will let you use the Gobball Set for a long time. If you have a Vita Maged Gobball Set your Cra should have around 700 Vitality which allows you to kill just about anything your level. Next goal is to acquire some Idols for a higher experience gain (if you're on Touch there's no idols), after you've done that head over to the Cania Lake and start farming Coco Blops to acquire a Coco Blop Set, you will use this until 80 when you upgrade it to the Royal version. After getting a Coco Blop Set, farm some Tofus and get a Vitality Mad Tofu Cloak. Lastly, buy Toady and Carnivorous Staff (these are for some reason really cheap, even though they're the best low level Agility items you can get). Reaching level 60 and acquiring this set makes you very strong for PvP so you can farm 1 vs 1 Kolossium really efficiently, this gets you about 1 level per win (fights take less than 5 minutes) and some Kolotokens which you later exchange for Pebbles and sell them. Doing Kolossium you can reach level 80 rather quickly and have enough Kamas from Pebbles to upgrade your Coco Blop Set to a Royal one. Note that if you start getting matched versus too strong enemies you can also do Treasure Hunts (PC Only), they give good experience and Kamas as well. At level 80 head over to Frigost Island and kill Mastogobblys if you're solo, or any Mastogob groups if you're with other people. This place is excellent to level at because some resources tend to sell really well and should give you enough Kamas to afford a Hurtful Locker Set which is an absolute beast budget set, it costs less than the Royal Coco Blop one even though it provides much more stats. After 105 you should start playing in a group, the most efficient way to level from now is to do Cania Moors or Grassy Plains area. Don't forget to do the easy Dungeon Achievements below level 100 so that you get enough Kamas to let you keep upgrading your Gear and tweaking it. At 150 if you're on the PC Dofus you can try finding a group for the Sufokia underwater mobs (you can even solo 1 group mobs there as a Cra, experience is great with Idols), or keep doing Frigost Island monsters if you're on the Dofus Touch. I've used this strategy to reach level 200 in quite a low amount of time at the cost of missing out on a lot of content that was designed for players. Meaning I did lvl 60 dungeons as a 110 Cra, which is not fun but is much more efficient time-wise. You have to decide yourself what type of player you want to be, and what you're trying to achieve in Dofus. The sets that I used which are really budget and starter friendly can be found here, they allowed me to level up without being forced to get Kamas due to the sets being really cheap you can just do the Dungeon Achievements and it should be enough for 2/3 of the parts.

Viable, best leveling spots and monsters for the Temporis 2 Event.

Blops and Robots, Robot mobs can't be found on the Touch version although the Crackler monsters that are there are also awesome. Great places for leveling due to the fact all the resources that you drop can be used to craft the best low level items. Level 40-60.

Kanigers and Foxfyters, decent drops and these Areas are good to level until 80.

Mastogobs are a great source of exp on both versions and Grassy Plains is excellent on PC due to the fact it is now a level 100 zone. Level 80-100.

Dark Jungle has very expensive drops and is therefore a very popular place for hunts (this place is not Solo friendly though), Tree Keeholo Foliage is the easiest place to level at, even if you're underleveled with trash items. People often go level here even at 80 or lower due to the fact you don't need to do any damage to win these fights. All you do is go full vitality in stats, get some decent vitality from gear and tank hits while your teammates (or you if you're a positioner) move the monsters around to the Snailmet Glyphs which kill any Allies or Enemies that start their turn on it. Tree Keeholo is the best place to grind, you can stay here until 180.

If you don't like grinding the same monsters for days, these two Areas on Frigost are excellent alternatives, although the monsters are much harder and require you to have a decent set. Level 130-170.

Also a notable Area for leveling, the monsters here are easy and Idols don't make them much harder and they often have a lot of stars as well. Level 140-180.

Great spots for leveling after 170 up to 200 if you want to, these monsters give a lot of experience whilst being relatively easy to kill. Sakai Island is an option as well, although the monsters there are quite a nuisance if you don't know how their spells work.

These spots are awesome leveling spots for anyone from 150 to 200, the fights are not too hard and highest Idol scores are doable, the only problem is that you will not be able to solo these mobs unless you're a Cra, and nobody will want you in their group unless you're a Cra or Enutrof...

Leeching is when a person wears a full wisdom set and dies while someone from their group kills the monsters the best place to do so is at Asparah Gorge and Sufokia (Underground), usually people charge 20kk per fight (a fight will get you at least one level at 160+) or leech on Korriander Souls in the Arena (80kk a fight which takes like 4 minutes and gives around 30m exp).