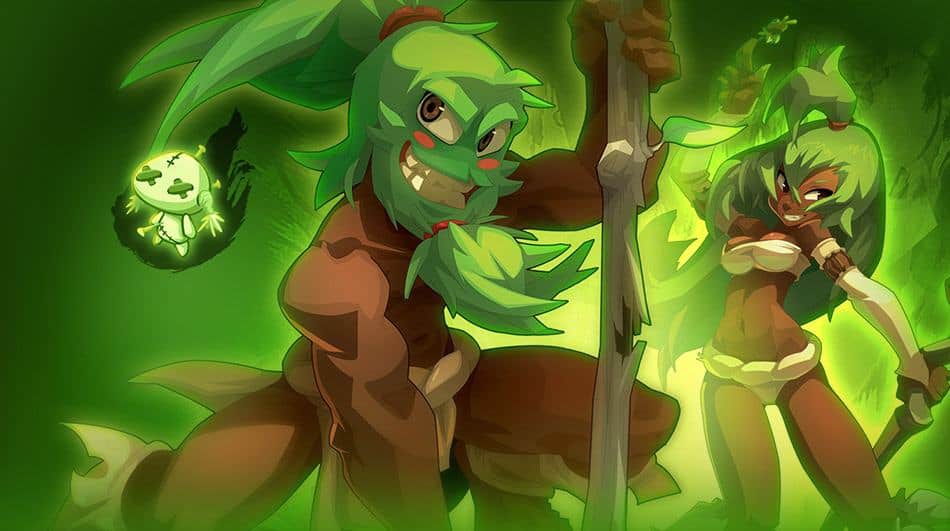 In this guide I will aim to give you an in depth idea of what the Sadida can achieve, where this class excels, how to build it and the roles that can be used to achieve easy victory for your team in both Dofus (PC) and the Touch (mobile) versions.
Characteristic Points

Intelligence. The Intelligence Sadida has Spells that focus on MP reduction, dealing really low damage and being quite useless unless you go hybrid (Bush Fire is not that bad). Int Sadi is primarily used as a support but really need a Healing Weapon in order for it to be viable.

Strength. Strength Sadida is the strongest build in both Dofus Touch and Dofus (PC) at the moment. With the addition of Variants and the new infection mechanic, a group of 2+ Sadidas can clear a pack of 8 mobs in less time than a group of 8 other characters would. The Dofus Touch Str Sadida is also awesome, with Bramble having huge range and Aggresive Bramble having great damage scaling it is one of the strongest Classes if you know how to play it.

Agility. The Agility Sadida is unplayable on the Dofus Touch version, though the PC version is very good. The Agi Sadi specializes in spreading infections really quickly and keeping them active on all enemies while also doing some damage. As a solo build it can be somewhat weak, but when you are duo with a Str Sadi it's absolutely nuts.

Chance. The Sadida is alright on both versions of Dofus. The Dofus Touch Cha Sadida can be good for Kolo because of his Tear having no LoS but is quite weak so you need to scroll your Chance and have a really good set for it to work. The PC Cha Sadida is very strong, with the new variants the Sadida can leech insane amounts of health back to the point of going from 1 to 2000 hp in a single Spell if all your enemies are infected.

The Full Strength Sadida focuses on dealing damage while also being supported by a lot of Dolls. Maddoll should be always summoned to Infect your enemies and with the addition of Paralyzing Poison you should always Infect the first few turns and then do crazy amounts of damage to the whole enemy team.

This set is great but may lack Summons depending if you want to make Dolls in your fights or just rush fights for the experience. If you do want more Summons, you can replace the Coral Ring for a Koalak Ring and the Koholiks Boots for Pippin Bloopts.


Dazzling Cloak. We need it for the AP.

Coral Ring, has kinda bad stats but it's the only thing that fits this set.

Lucky Dice is the best in slot Amulet for any Low level Chance or Strength character.

Sandals Koholiks are the only low level item that gives MP.

Due to the high amount of Summons the Hagogue Root Staff has you should no longer suffer low Summons problems. This set is a well rounded cheap variant, without the fancy <2 Idols but if you do prefer those, check the DofusPlanner link below the set.


The Hagogue Root solves all your summon issues.

Gelano. Preferably with MP because this set really lacks MP.

Bawbawian Shield if you need the Range, or keep the Treechnid Shield.
The best Trophies for the Mid level Strength Sadida set: Crimson Dofus, Goliath, Maniac, Emerald Dofus, Survivor and  Twitcher. The best mount for this build is a Seemyool.
Here is a much better lvl 130 set if you have more Kamas, because it uses Shaker and Nomad.

The High level set hits the 'expensive' markers but should serve you as a good investment for a lot of levels. You should upgrade this gear at around level 190 if you are able to.


The Hagogue Root if you want the summons, otherwise run Ice Daggers for more MP.

Due to this set having low MP try to get it maged on the Gelano.

Air Dial is my preference. You can run Leaf-Shield or Stalak Shield if you want to.

Eroclite Amulet is a great Str Amulet and gives Summons.

Broucey Ring is optional, if you can't afford an AP exo replace it for Gelano. Either Hairsh or Broucey need to be AP exo if you want 11 AP.

Baleenaboots give AP and MP which makes it BiS for us.

Cloak of a Thousand Excuses is an excellent Strength Cloak.

Catseye Bow is awesome, if you want more Summons get the Flinty Daggers.

The Agility Sadida is not very good before lvl 199/200 so just run the Strength build found above and then reset.

Allister's Crown gives a lot of Agility, you can swap it for something else though.

Bearbaric Wedding Ring, get AP exo if you want 11 AP.
Trophies: Shaker, Nomad, Major Stunter, Crimson Dofus, Dokoko and Ivory Dofus (If you don't have Ivory swap it for Emerald Dofus or Major Miracle Man). Best mount is a Karmeleon, or if you want 11 AP without exo Ring you can run a Seemyool and Jackanapes instead of Ivory Dofus.

If you prefer more Summons you can swap the Ring and Boots.

Dazzling Cloak. We need it for the AP.

Coral Ring, has kinda bad stats but it's the only thing that has some Strength and Vitality at this level.

Lucky Dice is BiS for any Low level Chance or Strength character.

Sandals Koholiks are the only low level item that gives MP, if you need Summons buy the Pippin Bloopts.

This Set is very strong considering it's quite cheap, Krosmahat might be rare on your server but you can easily replace it with another Hat, even the Wa Wobot Crown would be fine.


The Hagogue Root solves all your summon issues.

Gelano. Preferably with MP because this set really lacks MP.
The best Trophies for the Mid level Dofus Touch Strength Sadida set: Crimson Dofus, Goliath, Maniac, Emerald Dofus, Survivor and  Twitcher. The best Mount for this build is a Emerald and Crimson DT.

The High level set is very strong for the Sadida, it gives a lot of damage and if you hate the fact that the Agressive Bramble is linear you can swap the Cantile's Ring for the Sadida Class Ring. Another Alternative to this custom set is running a full Moowolf Set, pick whichever you like more!

Light Treeckler Belt is kinda mediocre, swap for Moowolf Belt if you want to.


The Hagogue Root for the high Summons.

Zoth Warrior Helmet gives a lot of HP and Strength.