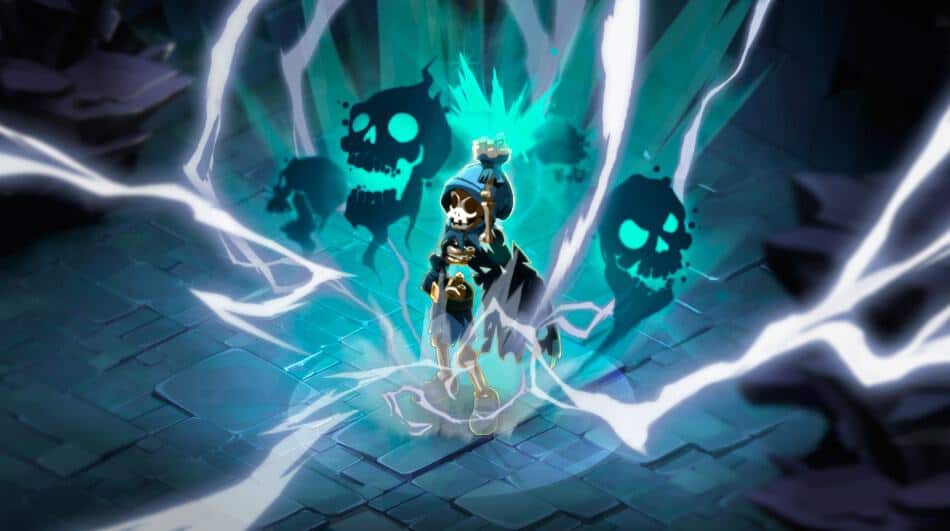 In this guide I will aim to give you an in depth idea of what the Sram can achieve, where it excels, how to build a Sram and what the best sets are.
Characteristic Points

Intelligence. The Intelligence Sram doesn't really have any direct damage dealing spells. The Int Sram heavily relies on invisibility to place enough Traps which will one-shot his enemy. This build is a lot of fun for Kolo, but sucks for any serious play.

Strength. Strength is the Sram cookie cutter build. This is by far the easiest Sram build to play, you just place a few Traps to make your opponent weaker and then smash them in close combat with Lethal Attack.

Agility. The Agility Sram is the strongest Sram build on the PC version of Dofus after the variants have been introduced. On Dofus Touch Agi Sram is not bad either, but the PC version Agi Sram absolutely murders everyone. You can solo basically any dungeon with it, and Kolo fights are ridiculously easy.

Chance. The Chance Sram is really bad, although when paired with another element it CAN be somewhat good. I would stay away from it, though.

All items should have overmaged vitality unless stated otherwise.

Agility Sram at low levels is no good therefore you should level with a Strength Set. You can find one in the Dofus Touch version below (just change the Mount into a Seemyool).

This set is extremely cheap, has decent Range and Agility which is really important for an Agi Sram due to the poison Spell being linear and with modifiable Range.

Royal Coco Blop Boots are really good here because they give Range.

Bawbawian Shield is BiS for the Agi Sram because of the Range.

Black Rat Ring gives a lot of Agility but is often very expensive, can fill this spot with whatever you'd like.

Gelano, get an MP maged one if you run the Sirocco Petsmount.

Ortimus Contrari's Bloody Blades are awesome because they give an MP and a lot of Agility, the only downside is that you must scroll/put points for 40 Strength to be able to wear it.
The best Trophies for the Mid level Agility Sram set: Acrobat, Survivor, Dokoko, Twitcher and fill the last 2 spots with whatever you want. The best mount for this set is by far the Sirocco which gives an insane amount of Agi but only use one if you have vitality overmaged gear.

This set is very powerful, you should be able to 1v1 just about anyone your level.

Earth Dial, you can take Inn Shield if you'd like.

Willkills Ring is an awesome Agi Ring but may be expensive depending on your server, can be changed for a Buck Anear's Ring.

Solomonk is BiS for any Str or Agi character, especially Srams.

Gelano should be MP exo'd unless you're running the Seemyool mount.
The best Trophies for the High level Agility Sram set: Shaker, Nomad, Major Stunter, Major Miracle Man, Crimson Dofus, Turquoise Dofus. The best Mount for this set is a Sirocco but feel free to run a Seemyool if you want a cheaper set with more defense.

This set is insane! It has about 30-40% resistances on all elements while maintaining crazy high amounts of Agility and solid Range.

Dreggon Helmet, you can replace it for something else if you don't want the resists.

Ilyzaelle Shield, IMO the best shield if you don't know which role you're gonna be doing. If you will mostly poison and ranged Con go Four-Leaf Shield or if you're gonna need to do huge Melee damage go Captain Amakna Shield.

Bearbaric Wedding Ring. Get one with Ap Exo if you can afford it, then you can drop the Jackanapes and be 11/6.

Get Vitality overmaged on every set piece unless noted otherwise.

Dazzling Cloak. We need it for the AP.

Coral Ring, has kinda bad stats but it's the only thing that fits this set.

Lucky Dice is BiS for any low level Chance or Strength character.

Sandals Koholiks are the only low level item that gives MP.

This set is quite cheap but effective, the only problem might be finding a Krosmahat, you can replace it for something else though.

Gelano. Preferably with MP because this set really lacks MP.
The best Trophies for the Mid level Dofus Touch Strength Sram set: Crimson Dofus, Goliath, Maniac, Emerald Dofus, Survivor and  Twitcher. The best mount for this build is an Emerald and Crimson/Plum Dragoturkey.

Very solid built custom set that should perform better than a Moowolf Set.

Due to this set having low MP try to get it maged on the Gelano.
The best Trophies for the High level Dofus Touch Strength Sram set: Jackanapes, Major Goliath, Major Maniac, Major Survivor, Twitcher, Crimson Dofus. The best mount for this build is an Emerald and Crimson/Plum Dragoturkey.

Aim for perfect stats on these items, exo resistance if you can afford it.

Bearbaric Band needs to be AP Exo if you want 11 AP.

Treadfast Amulet, as always try to get one without -Critical resistance.
The best Trophies for the End game Dofus Touch Strength Sram set: Crimson Dofus, Jackanapes, Major Goliath, Major Maniac, Major Survivor and Turquoise Dofus. The best mount for this build is an Emerald and Crimson/Plum Dragoturkey.