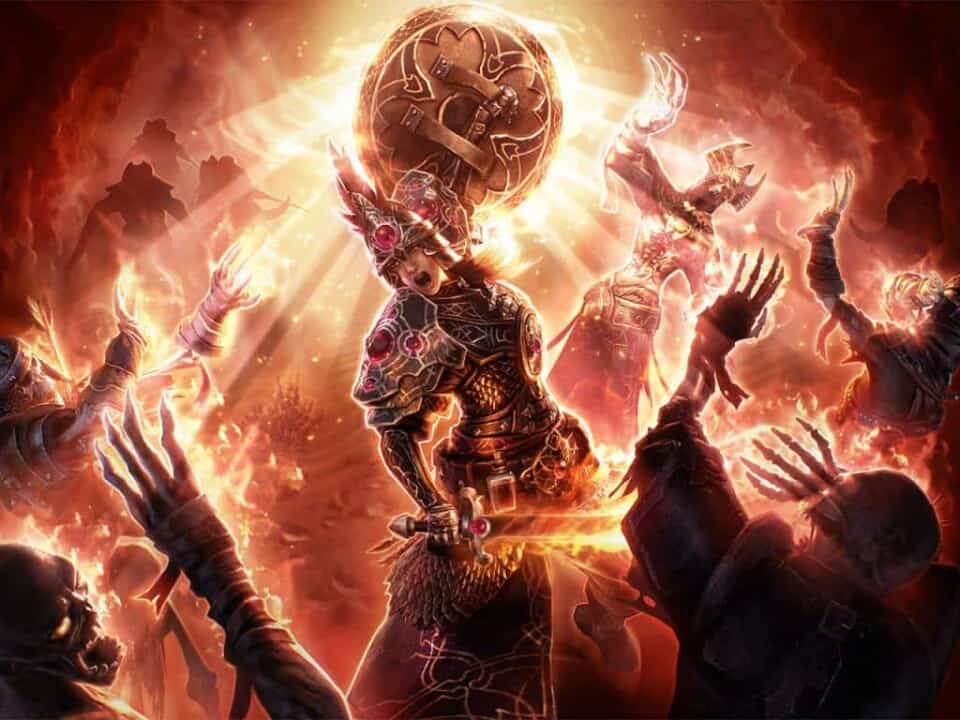 The latest Grim Dawn expansion came out recently, introducing the all new Oathkeeper mastery (class) you can pick to play with. The Oathkeeper features a variety of different mostly melee based skills, along with Aegis of Menhir and Vire's Might which require a shield to be used. At the moment, the most viable Oathkeeper builds are with Eye of Reckoning and Vire's Might, though Aegis of Menhir and Empyrion Guardians are not too shabby either. In this Grim Dawn Oathkeeper Build Guide we'll be showcasing the Eye of Reckoning build (PoE players would call this a Cyclone build) as it's based around on you holding down a button and just annihilating anything in your way. The Eye of Reckoning Oathkeeper build is very simple to play, non reliant on special gear and therefore it works quite well for beginners.

Have you beaten the secret Forgotten Gods "Crate of Entertainment" Boss?

The Eye of Reckoning Oathkeeper build is quite easy to play, as we mentioned earlier, the basic playstyle of this build is just to hold RMB and kill enemies while avoiding projectiles. When you encounter bosses, it's best to cyclone around them in order to avoid taking too much damage as early game this build can be squishy and very energy dependent. It can also prove useful to spec into Guardian of Empyrion so you get some more AoE and trash mob clear. Overall, this Oathkeeper build melts Heroes pretty quickly and you will not have any issues with clearing certain content in Grim Dawn.

Leveling with the Eye of Reckoning Oathkeeper build is an absolute breeze. Until you get access to Eye of Reckoning just level with Vire's Might (even though it is a mobility skill, it's actually quite strong!). After that, put a point into Empyrion as they can be quite strong for early clearing, especially if you're playing solo. The only issue you might have early game is low health and defenses so always be on the lookout for gear upgrades and don't forget that Eye of Reckoning has max DPS with a 2h weapon.

This build can work just fine as the Oathkeeper, though some may prefer to take their DPS to even higher level and that's where the Demolitionist comes. Once you take Demolitionist, you'll become a Shieldbraker class-- a combination of Oathkeeper and Demolitionist. I would personally stay away from Demolitionist until you're at least level 50 because the Oathkeeper has valuable skills that scale well with points and will provide additional defenses which may be useful if you're playing Hardcore.

In case you like being mobile, place one point into Vire's Might ASAP. Next, spec one point into Eye of Reckoning, Eymprions, Presence of Virtue and Ascension. Max out Eye of Reckoning and continue placing points into Oathkeeper until you've unlocked everything. Once you have, go ahead and spec into Soulfire, Celestial Presence, Divine Mandate, Rebuke, Clarity of Purpose and Resilience. How many points you place into each spell really depends solely on your playstyle and what you're trying to achieve with your character, though at the end you'll want all of these maxed out but with Resilience kept at level 5 and Vire's Might on 1. Once you feel like you lack some DPS, take the Demolitionist mastery and take Flame Touched and Temper. Lastly, Vindictive Flame and Ulzuin's Wrath can prove as a good choice.

This Oathkeeper Build is focused around Physique items, therefore you'll want to keep the Physique at a high level. Cunning may also be required for some gear pieces. Overall, just place points into attributes depending on what you need to use a certain set of items.

For this Oathkeeper Build you need to take scholar's light and the spider first; then grab magi, lotus and then respec out of magi. This way you can save some points but if you want to stay on spider go ahead it's not a bad constellation at all.

In case you are playing on Hardcore or just enjoy having permanent leech, respec out of Korvaak and take Ghoul.
All the different Devotion builds can be found on the build links at the start of this article.

We hope you've found this Grim Dawn Eye of Reckoning Oathkeeper Build Guide useful! If you theorycrafted an even better build on grim tools, feel free to leave a comment below.