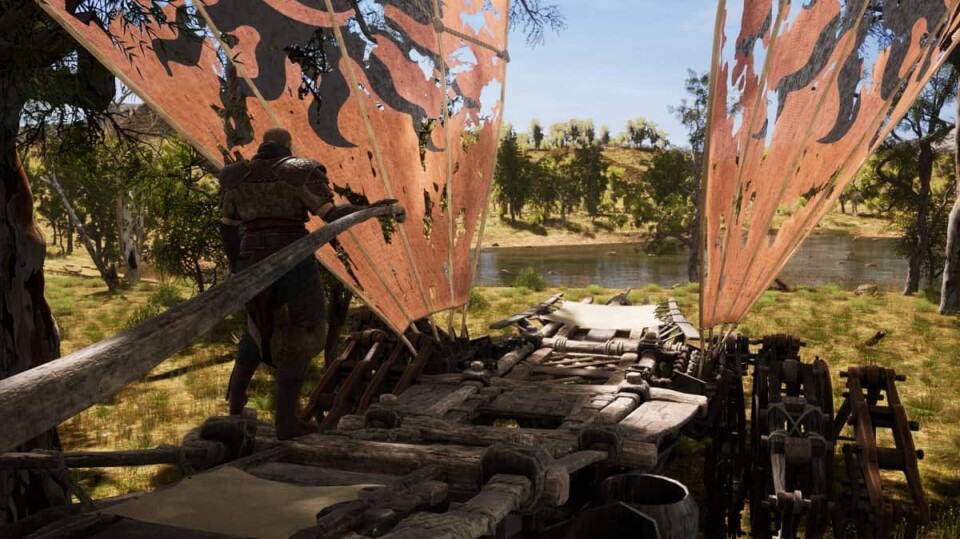 Last Oasis is a survival MMO that focuses on building mobile bases on "Walkers" that are used to conquer the vast open world this game has to offer. You are going to have to try and survive in this dangerous game by finding sources of food and water, fending off pirates, crafting items, trading with other players and fighting in intense pvp battles for territory. This starter guide for Last Oasis is primarily aimed towards new players who are playing this game for the first time as it's main focus is on the game features and basics. For more in-depth information about Last Oasis make sure to check out our other guides!

If you want, keep this post bookmarked because we'll be updating it regularly with more information as we find it out!

When you've created your character you'll spawn in a zone called the "Cradle". The Cradle is a low level starting zone that allows you to run around and explore the game for a while before you enter the dangerous and punishing aspects of the Oasis. During your time in the Cradle you'll have a lot of tutorial quests to finish which will teach you how to gather resources, access your inventory, craft your first items and much more.

As with all other mmo survival games, your first goal will be to gather some of the main early game resources-- wood and fiber. You can find wood by collecting wooden sticks from the ground and fiber by harvesting bushes.

Currently, the only thing you'll have unlocked in the crafting menu is the "Beat Stick" and that's the goal of the first mission. To craft the Beat Stick you'll need: 7 Wood and 5 Fiber.

After crafting the Beat Stick you'll need to equip it by right clicking on its icon. Essence of Life requires of you to go and harvest some Cactus Flesh from Cactus plants around the Cradle. Hitting the Cactus plant will harvest Cactus Flesh from it and you'll need 8 pieces of it for the quest. All you have to do now is to eat 8 of the pieces to bring your water level up.

This quest sends you on a mission to retrieve "Fragments" which are used to unlock things on your Skill Tree. For this particular mission, we'll need to unlock the Sand Bed recipe.

The Walker Fragment you're looking for is going to be below the huge wooden structures and you can gather it by pressing "F" on your keyboard. Congratulations, you've acquired your very first skill tree unlock.

By opening the Skill Tree menu you'll notice five categories: Vitamins, Equipment, Crafting, Construction and Walkers. You need to find the Sand Bed under the Construction tree and unlock it with 25 Fiber (gatherable from bushes).

For those wondering, the Sand Bed is a respawn point for your character early in the game as you're going to be dying a lot.

How does the PvP work?

Since there is no "PvE only" server in Last Oasis, you'll find yourself doing PvP very often. As the servers just opened, the main emphasis is going to be on improving in melee combat as not many will have dangerous ranged weapons early on. Melee weapons are going to have four stats: damage, penetration, attack speed and area of effect. Each of these stats is going to vary between different weapons so make sure to pick the weapon that suits you best, especially early in your Oasis adventures.

On the other hand, Armor only has three stats: % damage reduction, flat damage reduction and the movement speed modifier. Getting good armor is incredibly important as it'll be used to essentially block hits and reduce damage.

Another great aspect of this game are the Grappling Hooks. As you finish the tutorial quests you'll already have the basic Repaired Grappling Hook which can then later be replaced by two others from the skill tree. A Grappling Hook is going to reel you in towards enemies and stop them from sprinting which is a crucial element of melee builds and close combat fights.

Lastly, you'll take a lot of damage, this can be fixed with bandages. In case you can't heal up and you die, there will be a 60 second timer that prevents your respawn.

There is a plethora of resources that can be found in Last Oasis and these are the main early game ones that you'll stumble upon. If you're interested in any other resource that isn't listed here, make sure to check our resources guide.

Pickaxe is used to gather stone and can be crafted from wood and stone.

Sickle is used for gathering Fiber, Aloe Vera and Cattail.

Axes are used primarily for wood chopping but in some cases they're also viable close combat weapons. To craft an axe (hatchet) you'll need 8 Stone and 1 Wood Shaft.

Cactus plants are essential for early game survival as they're the main source of water. If you've got any weapon or tool you can gather Cactus Flesh from a plant and if you're bare handed then the fruit that hangs on them will be your only option.

As mentioned previously, you can gather Fiber from Bushes. To maximize your efficiency, use a Sickle or Scythe.

To acquire wood you'll need to chop down trees with an Axe.

Sometimes you'll find little pieces of stone of the ground which are lootable by hand. When the servers run out of those, you need to hit a stone boulder with a Pickaxe to harvest stone.

The Walkers are movable "ships" that can carry your base on them and as the walker grows in size it can carry bigger bases. This is a cool mechanic as you can pack boxes and crafting stations inside your base and then place it onto a walker. Doing so will allow you to be travel ready at all times so you can explore the vast lands of the Oasis. For more information about Walkers and how to craft your first one make sure to check our Walker guide.

Crafting Stations are essential to every character as you'll need them to craft various items, cook meat and extract water. These are just the beginner crafting stations that you're going to encounter most often.

One of the first early game stations that you're going to have to craft. The Campfire is used to cook things like cactus flesh and extract water but at the cost of fuel (wood). You can also make vitamins there and other useful stuff.

Most often you might find yourself out of Wood which is used to heat the Campfire. This is why a stomping station can be essential as it can produce water without any fuel!

By combining wood and fiber you'll be able to make wood shafts which are used for most early game gathering tools.

Fiberworking stations are able to produce Fiber out of Rupu Pelts. Additionally, Fiber Weave and Ropes can also be made here.

If you'd like to trade, you'll need to find a trading station. These have randomized locations in each map because they're also safe zones-- meaning you can't be killed there! The safe zone lasts for 15 minutes which is plenty of time if you have to go afk for a moment.

Trading in this game works on the "auction house" principle, which means you're only able to buy from other players and sell to them. Most resources and items are sellable there, and you can also buy stat respecs from other traders.