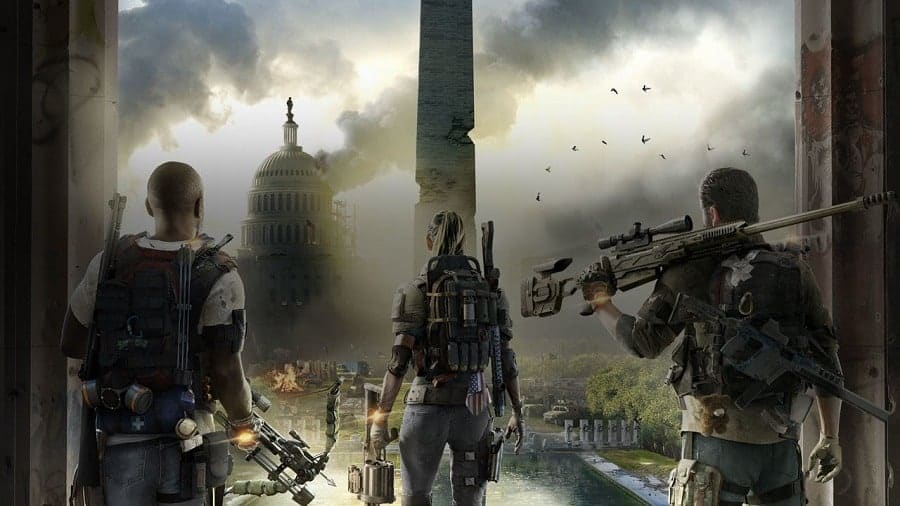 Assault Rifle characteristics include 30 bullet round base magazines, moderate recoil patterns, average reload times and average base damage and full auto fire only. The best Assault Rifle weapon is the Famas because it has the highest DPS, whilst the Kalashnikov AKM holds the highest base damage per round on an Assault Rifle.
Assault Rifles feature many different gun options, all the AR rifles have easy to control recoil, reload times close to the SMG's and they are surely competitive but not overpowered at the moment.

Submachine Guns have always been a popular choice among really any games that have guns in them. SMG's are usually the favorite simply because they have very low reload times and can dish out serious amounts of damage within a short amount of time. The Division 2 Submachine guns feature 25-53 round base magazines, fast reload times, solid base damage and they are full auto fire mode only.
Overall, SMG's are very easy to learn and handle and the highest SMG DPS gun is the Vector, whilst the T-821 holds the title as the highest damage Submachine gun.

Light Machine Guns are extremely popular in The Division 2 right now. They are currently very "Meta" weapon choice as they are just ridiculously strong. They have magazines that can store from 45 up to 100 rounds, high recoil and long reload times.
The Highest DPS LMG is currently the M60, closely followed by the M249B. The Highest damage per round is also on the M60 so it's currently the best and strongest Light Machine Gun in the game. With LMG's finally competitive, there are a lot of LMG builds out there. Most importantly, LMG's are beginner friendly weapons as you can just start firing and even if you don't hit a lot of enemies you will still provide sustained fire so your allies can infiltrate the enemies' positions.

Rifles feature 5-30 round magazines, heavy recoil, high reload time and they're often times not a very popular choice. They currently have a very high amount of base damage so they're completely viable for all content. The Rifle with highest Damage and DPS is the MK17, which makes it the strongest Semi-Auto Rifle in The Division 2.

Shotguns are close combat weapons which have base ammo going from 2 to 20 rounds, moderate recoil, high reload times but also high damage output. The Double Barrel Shotgun is currently the best and most overpowered shotgun in the game, dealing a total of 86480 damage, which converts to 288K DPS-- two and a half times more than the Super 90. With the Shotguns being very strong, they're often a popular choice for close combat. In addition to the increases to damage from Specializations, Shotguns are extremely powerful.

Marksman Rifles (MR) can hold up to 10 rounds in their magazine, they have extremely high recoil and long reload times which can be forgiven because of their ridiculously high damage output. These weapons are often times referred to as "Snipers" and they are a great choice for any long distance combat. If you know how to aim and you can reliably headshot your enemies, Marksman Rifles are perfect for you. Even though the M44 MR has the highest damage output, the title as the best and highest DPS Marksman Rifle goes to the SVD with almost double the M44's DPS output.

Sidearm guns have base round magazines starting at 2 and ranging up to 20. With their light recoil and fast reload times you'll be able to dish out average damage to any close to middle distance enemies. The Diceros is currently the best and most powerful sidearm weapon out of all the other ones that have been tested. In case you're wondering how to obtain the Diceros-- you can get it by choosing the Demolitionist Agent Specialization once you've unlocked it. Diceros is overall a very solid gun that will serve any close to mid ranged combat. Sidearms in the current meta are really strong and ones such as the Diceros can easily be used as a primary weapon.

The Weapons Spreadsheet data was extracted from AdmiralRegis' post on Reddit so all the credits for weapon testing go to him.

All of the RPM/MAG/Reload Time values were taken from the lowest tier (WT 0) weapon variants.

We hope that you've potentially found the best and strongest Division 2 weapon for you, if you have any additional questions about our The Division 2 Weapon Tier List And Guns Guide feel free to leave us a comment below.

How to get The Division 2 Osprey 9 SECRET Suppressor