Dauntless Build Guide
May 31, 2019
by GamerDiscovery 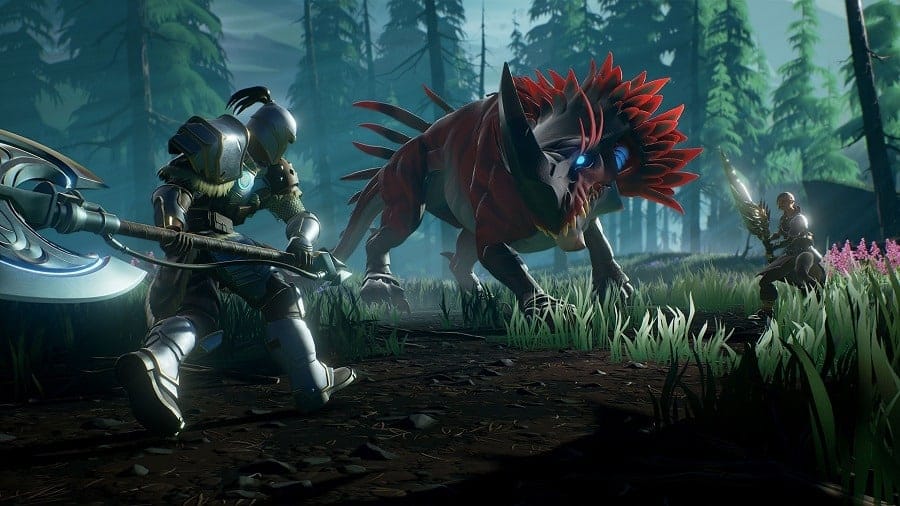 Choosing the right build for your Dauntless character is going to be very important during your playthrough. In this article we'll be showcasing an Axe build which focuses around the Stalker's Mercy Axe. This Dauntless Axe build is easy to use-- you can be relatively inexperienced at the game and still easily kill monsters like lesser Behemoths and all the way to the Heroic Behemoths which makes it a solid beginner build. What makes this Axe build perform really well is the fact that you get lifesteal, damage resistances, damage increases and lastly an attack speed increase which will allow you to dodge enemies because of the relatively fast mobility this build can have from the acquired Perks.

This build is viable for Dauntless on Playstation 4, Xbox One and PC.

As far as your weapon goes, you'll have to reach the Dire Behemoths to upgrade it along with your gear to +6 so you get the second bonus stat from them. These were the minimum requirements, and whilst you can technically use this build earlier than Dire Behemoths (by killing Riftstalker to unlock Riftstalker's Mercy) it won't have as high damage as the build with the upgrades when you reach DB and don't forget that you need +3 Wild Frenzy Cell and +3 Conduit Cell as the most optimal setup.

This build revolves around the Stalker's Mercy Axe which can be forged from Riftstalker reagents. You'll ideally want the Axe with Umbral and +3 Wild Frenzy.

Dealing damage with the Stalker's Mercy Axe will then have a chance (based on damage dealt) to generate a Shadow Orb that increases damage dealt by 2.5% for 5 seconds.
In the case that 5 or more Orbs are present, the bonus doubles and you may often find yourself with even more than 5 Orbs, scaling your damage incredibly high.

Boreal Resolve with +3 Iceborne Cell and the +3 Rage Perk.

Gnasher Grips with +3 Rage Cell and the +3 Ragehunter Perk.

Boreal March with +3 Cunning Cell and the +3 Iceborne Perk.

Lastly, the lantern of choice for this build is going to be the Drask's Eye which will increase your damage by 30% for 6 seconds when you use it. Additionally, you'll want to get +3 Conduit Cell on it.

This Dauntless build will upon completion give you six Perks at maximum level: Conduit, Cunning, Iceborne, Rage, Ragehunter and Wild Frenzy. Having such an optimized build, you'll be able to shred through content but the only downside is that most of these perks will make you focus on a low health playstyle as a "Berserk". The basic idea is that you go down to 50% health in order to claim the bonuses of Iceborne, Rage and Wild Frenzy. Whilst Rage and Wild Frenzy provide this Axe Build with enough DPS increases to clear content relatively quickly, Iceborne is going to give it enough sustain to actually survive fights by granting a 30% decrease to damage taken and 8% lifesteal which will keep you on 50% health at all times.

We hope that you found this Dauntless Axe Build Guide useful and as this is one of the strongest Axe builds for Dauntless in 2019. In case you have any more questions about this Dauntless build, feel free to leave us a comment below!